From 506 Archive
Jump to navigation Jump to search

The 2022 United States Open runs from August 29 to September 11 at the USTA Billie Jean King National Tennis Center in the New York City borough of Queens.

ESPN holds the U.S. TV rights, which they have had since 2009 in some form and have held exclusively since 2015. Linear coverage airs on ESPN and ESPN2. All of the matches are available on ESPN3 or ESPN+.

The tournament is held over 17 courts. Arthur Ashe Stadium is the largest tennis-specific stadium in the world at 23,771 seats. Louis Armstrong Stadium has a capacity of just over 14,000 seats, followed by the Grandstand at 8,125 and Court 17 at 2,800. The remaining courts are numbered 4-16.

Daniil Medvedev, the men's world no. 1, is the top seed; since world no. 2 Alexander Zverev is still out after an ankle injury suffered earlier in the year, Rafael Nadal, the no. 3 player, is seeded second. Iga Swiatek carries the mantle of the top women's player into the tournament, both as the top-ranked player and the no. 1 seed. The top-seeded Americans are #10 Taylor Fritz on the men's side and #8 Jessica Pegula on the women's side. Coco Gauff is seeded 12th and Serena Williams, playing the final tournament of a career that began in 1995, is not seeded.

Dates in parentheses indicate the year each person joined ESPN's tennis contingent. These are generally taken from the ESPN press release, except for Goodall and Stubbs which do not have dates listed.

On the ESPN mix channel on DirecTV: Sam Gore and Luke Jensen

The color-coded schedule graphics below are based on an average set length of 40 minutes; a best-of-three match is blocked at an hour and 40 minutes while a best-of-five match is 2:45, based on the likelihood of multiple sets if each set is a coin flip. Suspended matches are prorated based on the score when they are stopped.

Each match's position on the draw is indicated by a number in double square brackets. Each pair of matches with the same number meets in the next round; these numbers start with 1 at the top of the draw and proceed down the list. For example, there are 32 second-round matches, so the last pair of first-round matches is marked with 32.

In the text listing of commentators, each match is numbered sequentially when it first appears. Brief updates on other matches are indented. Angle brackets indicate split-screen coverage.

If there is only a textual listing of the show-court schedule, this means I haven't made the graphic yet and it's coming. :)

Forecast: Mostly cloudy, then gradually becoming sunny, with a high near 85. South wind 8 to 10 mph. 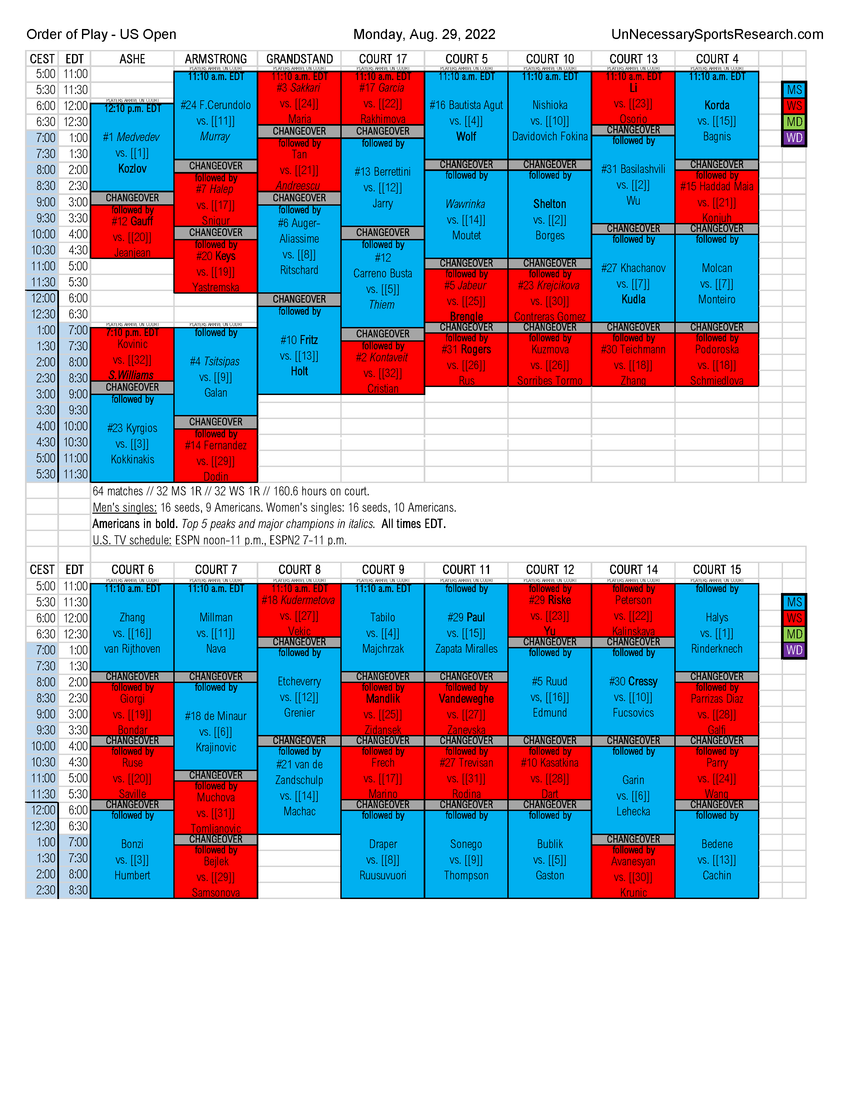 Retrieved from "https://506archive.mywikis.wiki/w/index.php?title=2022_US_Open&oldid=4928"
Cookies help us deliver our services. By using our services, you agree to our use of cookies.